Cows (retitled A Cow on the Line for American releases) is the 2nd episode of the 2nd series and the 28th episode of the series. It is based on the story of the same name from the Railway Series book Edward the Blue Engine. It first aired in the US on the Shining Time Station episodes Impractical Jokes in 1989 and Fortune Teller Schemer in 1993. In this episode, Gordon and Henry tease Edward for letting cows uncouple his trucks, but Edward has the last laugh.

Edward is the oldest engine on the Island of Sodor and has some worn-out parts which cause him to clank as he runs. One bright and sunny day, Edward is taking some cattle trucks to a nearby market town. The trucks are making a lot of noise, as is Edward by this point. On the line is a field where some cows were grazing. The noise and smoke produced by Edward and the trucks disturbs the animals as they're not used to it. As Edward passes by, a number of cows break the fence, run across the line, and break a coupling, causing a truck, the brakevan, and the guard to be left behind. Edward (believing the jerk to be the trucks getting up to mischief) continues on his journey, clueless about the mishap. It isn't until Edward gets to the next station that either he or his driver realise what happened.

When Gordon and Henry learn about the accident, they laugh and tease Edward constantly, making him very angry. Toby is also indignant towards the larger engines, knowing they've never encountered cows and don't know the trouble they cause.

A few days later, Edward was still in a bad mood when Gordon sails through Wellsworth with the express, teasing him. Gordon continues down the line telling the coaches to hurry, when he and his driver think they see something on the upcoming bridge. The driver shuts off steam and applies the brakes and as Gordon gets closer, he sees the obstacle is a cow. Gordon isn't worried and tries to shoo the cow away but she doesn't budge having had her calf taken away and feeling upset. Gordon's crew and the passengers try to get the cow to leave to no avail.

Henry soon comes by with his train and also thinks that the cow can simply be ordered away. When this doesn't work, Henry gets nervous and backs off claiming he doesn't want to hurt her. Reversing back to the station, Henry's guard tells the stationmaster about the cow blocking the line. The porter realises it's Bluebell and says that her calf is it at the station. The two men decide to send the calf in a truck pulled by Percy.

At the bridge, Percy arrives with the calf and reunites it with its mother. The two cows are then easily led away by the porter. As they leave, Gordon and Henry make an agreement not to tell anyone about the incident. Despite this, the story quickly gets around and Edward is ready to tease Gordon and Henry that night in the shed. Gordon defends himself, claiming that he simply didn't want Bluebell to hurt herself by running up against him.

Edward tells Gordon that he understands and Gordon worries that Edward all too well does understand.

Gordon and Edward at Wellsworth

Thomas, James, Gordon, Edward, Henry, and Toby at the sheds 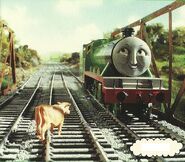 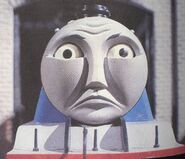 Percy and Henry at Crobsy

Gordon, Edward, and Henry at the sheds